A Question of Colour

Last week, I wrote about the distinguished Cambridge University professor Alfred Newton (1829-1907). On 18 November, 1869 Newton published a paper in the journal Nature, describing the great variation in egg colouration among parasitic Common Cuckoos. He speculated that an individual female cuckoo might lay her eggs in the nests of a particular host species. If the colouration of the hosts’ eggs matched her own, they might avoid detection, and so be more likely to survive. Newton went on to suggest that over a period of years, the colouration of eggs, and the tendency of females to lay in the nests of particular hosts might become heritable traits.

I strongly suspect that these final thoughts about heredity were Newton’s attempts to tie the colour of cuckoo eggs to Charles Darwin’s ideas about evolution by natural selection. On the Origin of Species had been published just ten years before, and biologists of the day were still struggling to deal with the profound implications of Darwin’s ideas. 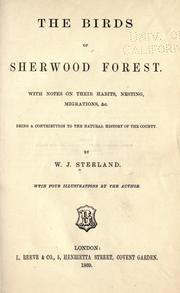 Not everyone was convinced that Newton had made the correct conclusions. Just two weeks after Newton’s 1869 paper, a response appeared in Nature, written by W. J. Sterland, author of The Birds of Sherwood Forest. “I have no intention to criticise so able and accomplished a naturalist,” wrote Sterland, but rather to “elicit information on some points of difficulty.” While Newton described remarkable variation in colouration of cuckoo eggs, it was the experience of Sterland and some of his colleagues that there are few species of birds whose eggs are less variable.

When it came to Newton’s ideas that a female cuckoo would lay her eggs in the nest of just a single species, that her eggs would resemble those of her hosts, and that the process might be heritable, Sterland had his greatest concerns. If sixteen varieties of cuckoos each produced a particular type of egg, each parasitizing a different host species, then “how are these sixteen varieties to be kept from crossing?” If members of the population do interbreed, “how can the alleged distinctive style of eggs be preserved?”

To be fair to Newton, no one in 1869 could fully answer that question. An understanding of the principles of the inheritance of characteristics had to wait more than thirty years for an appreciation of the research of Gregor Mendel on pea plants.

In a note published on December 23, the eminent ornithologist Henry Eeles Dresser (1838 – 1915) added his thoughts on Newton’s paper. Dresser was particularly interested in the breeding biology of brood parasites, and objected to the notion that cuckoo eggs were particularly variable in appearance. Unusually-coloured cuckoo eggs could be found, but he found them to be “of very rare occurrence.”

Dresser conceded that an individual female cuckoo might produced eggs that closely resembled each other, but that “I have not found that the same cuckow generally makes use of the same species of bird as nurse for her offspring.”

The following week, it was the turn of Cecil Smith (1826 – 1890), author of a number of books concerning the birds of Great Britain. Smith was not so polite in his criticism as Sterland or Dresser had been, perhaps because Newton had taken direct aim at Smith’s writings in the original cuckoo paper. Smith accused Newton of misreading the words of earlier writers, and manipulating them until “there is but little of the original left.” After three pages of critique of Newton, Smith went on to state that “Cuckoo’s eggs do not in fact vary from each other more than those of many others.”

The breeding biology of parasitic birds and their hosts remains a lively field of investigation. Studies of the arms race between them show the interactions to be beautiful shaped by evolution by natural selection. I hope that Newton would take some small comfort in that.

Photo credits: Cover of the “The Birds of Sherwood Forest” by W. J. Sterland, www.amazon.com; front page of the “History of the Birds of Europe, Volume 1” by Henry Eeles Dresser – auctions.bidsquare.com. 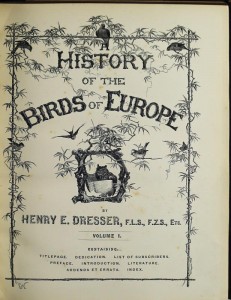