Except for Eagles and Pelicans…

One of the themes of this series is that we generally know more about the lives of birds than we do about any other group of animals. Most birds are active during the day, and are not shy about their comings and goings. Many incubate their eggs and feed their chicks in places that are easy to access, and some breed readily in captivity. Some birds are particularly good indicators of environmental health. If you wish to investigate underlying truths about life, birds make ideal study organisms.

Among the phenomena that have been particularly well studied in birds is the timing of the start of continuous incubation of the eggs. Even the best fed hen can only produce one egg a day. As a result, eggs in a nest are bound to be different ages. If the parent birds were to begin incubation as soon as the first egg was laid, embryonic development of that first egg would begin right away, and chicks would hatch on different days, resulting in chicks of different sizes.

There are some spectacular examples of how chicks of different ages works perfectly for the parents, ensuring that they can produce the largest possible number of healthy offspring. These examples include eagle and pelicans. If food is abundant, then all eagle chicks in a nest will be well fed. If it happens to be a lean year, then the youngest, smallest chicks loose out, but the larger, older chicks survive. Pelicans produce two eggs each year, but only one chick ever survives to leave the nest. The second egg is nothing more than insurance against the possible failure of the first egg.

However, parent birds of most species do not begin incubation immediately after the first egg is laid. The parents wait until the last (or second-last) egg is produced. Because embryonic development does not begin until incubation is more or less continuous, all of the eggs in a nest will hatch at more or less the same time.

The advantages of synchronous hatching are many. Chicks in a nest are particularly vulnerable, and so it is in the parent’s best interest to keep that period as brief as possible. If all of the chicks in a nest hatch at the same time, none will have a competitive advantage over the others, increasing the probability that all will survive. If all chicks are at the same stage of development, then they will all be ready to leave the nest at the same time. This means that parents will not have to feed both chicks in the nest and chicks that are exploring the world. With all of these advantages, it is not surprising that birds of so many species start incubation when the last egg is produced.

However, there are exceptions. If we claim to understand the biology of birds, then those exceptions will require explanations. Next week I will describe how recent research has come to terms with the asynchronous hatching of chicks of an exceptional Australian finch. 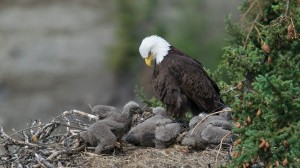