In the spirit of the first day of April, I present a challenge. Below you will find descriptions of three studies. Your task is to deduce which two studies described are legitimate, and which one is made up. Are you ready?

It is no surprise to anyone that many species of birds migrate long distances between their breeding grounds and spots where they spend the non-breeding season. Snails, on the other hand, are almost perfectly constructed to stay exactly where they are. Until…

As part of a long-term study of migratory birds in Louisiana, researchers routinely captured, measured and banded songbirds in forested habitat near Johnson Bayou. On their northward spring migration, large numbers of birds use this spot after crossing the Gulf of Mexico. Each captured bird was inspected thoroughly. The assessment of an Indigo Bunting revealed a number of snails attached to the bird’s breast, buried beneath its feathers.

If you suspect that this description is the phony, then you are mistaken. In a paper published in The Wilson Journal of Ornithology in 2017, Theodore Zenzal, Emily Lain and Michael Sellers of the University of Southern Mississippi concluded that small, hitchhiking snails may be able to take advantage of songbirds to travel great distances, expanding their ranges and colonizing previously unoccupied spots. Transportation of this sort could have serious ecological consequences if exotic species arrive, establish themselves, and become invasive.

Males of some species of birds, but not all, have a penis. Some of these penises are pretty impressive; I will leave it to you to search for information on the Argentine Lake Duck. Within a single species of duck, there is considerable seasonal variation in penis length; they become longer in spring, and shorter after the breeding season. However, not all drakes are equally well endowed. What factors promote the genitalia of some males over others? Could it be that a surplus of males would cause each male to grow a longer penis? 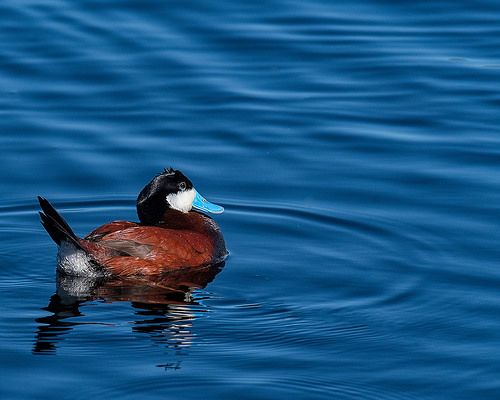 Ruddy Ducks and Lesser Scaup were studied in captivity in Connecticut. Females were housed either with a single male, or with multiple males, establishing a competitive situation. When faced with competition for mating opportunities, drakes grew longer penises than did those with a hen all to themselves. The situation was more complex among Ruddy Duck drakes. Males in groups grew their penises more quickly, but maintained that length for a briefer portion of the breeding season.

If you picked this study as the sham, then you would be incorrect. Patricia Brennan of Mount Holyoke College and her coworkers published the results of their study of Lesser Scaup and Ruddy Ducks in 2017 in the journal The Auk. It is possible that a longer penis allows a drake to deposit his sperm deeper in a hen’s reproductive tract, which could be important when males are competing with each other. The authors described the genital size of male Ruddy Ducks as “extreme,” and their mating system as “promiscuous.”

That leaves only the third study, right? Consider calcium carbonate. This chemical compound is found in three states. One of these, calcite, makes up the bulk of bird eggshells. A different state of calcium carbonate, called vaterite, is rare in nature, probably because it is not a particularly stable compound. Among the places that it can be found is kidney stones and gall stones. It can also be found as a thin, chalky layer on the outside of eggs of some bird species. That layer doesn’t seem to prevent water loss across the egg’s shell. Could it be that vaterite helps prevent shell breakage when two eggs bump into each other?

“Vaterite” doesn’t even sound like a real word, and yet, once again, the study described was completely legitimate. Steven Portugal of Royal Holloway University of London and his colleagues studied vaterite on the shells of the Greater Ani, a large and beautiful cuckoo from Central and South America. In a 2017 article in the journal Ibis, the researchers explained that that when two Greater Ani eggs bump into each other, the dent that results is less than the thickness of the vaterite layer. These findings suggest that the role of vaterite, at least in Greater Anis, is to make eggshells less vulnerable to fracturing.

Just because something seems unlikely, that doesn’t make it untrue. Keep that in mind this April Fool’s Day.