One of the greatest joys of being involved with the study of birds for a very long time is the opportunity to watch explanatory ideas unfold. An hypothesis that is accepted by one generation of bird biologists can be overturned completely by the next. For instance, when I was a university student, I learned that birds such as vultures and ibis had bald heads because it helped them to stay clean. If you spend your day with your head in garbage, or blood-soaked corpses, it could be challenging to keep your feathers in good condition.

It seems that that story is more complicated than that…

Birds with dark plumage probably benefit when their feathers absorb solar radiation. Darkly-coloured individuals likely spend less energy keeping warm than they would if they were lighter in colour. That is not the only potential advantage of dark feathers, but it seems to be one of the most important ones. However, at some times of the year, or at some times of the day, the heat absorbed by dark plumage might become too much of a good thing. Could it be that the bald heads of some darkly-coloured birds serve as radiators of excess heat? 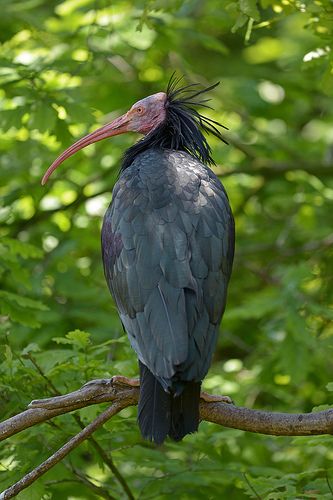 Ismael Galván and his Spanish colleagues at the Doñana Biological Station in Seville and the University of Córdoba addressed the possibility that some birds are bald because it allows them to radiate heat when conditions get to warm. The group studied adult Northern Bald Ibises at Zoobotánico Jerez, a zoo and botanical garden in southern Spain. The body of this bird is covered completely in black feathers, except for a bald head which is red. The intensity of this red colouration can change rapidly when more blood is diverted to vessels close to the skin’s surface. The blood in these vessels would bring heat from the core of the body to the surface. All of this suggests that individuals might be able to use their heads as radiators to prevent overheating.

The study was conducted in July, the warmest part of the year in that region. Galván et al. collected thermal images of semi-captive ibises over a wide range of environmental temperatures. Over a range of conditions, it was possible to determine the temperature of the feathered parts of the body, as well as the temperature of the naked head. As these measurements were being made, the group also quantified the intensity of red colouration of each subject’s head.

The warmer the day, the warmer the bird. The warmer the bird’s head, the redder it was. “Norther Bald Ibises lost considerable heat amounts through the unfeathered head,” wrote Galván and crew. This radiation of heat continued until the environmental temperature rose to 35º C, about 95º F, after which the radiator was no longer effective. The researchers are not currently able to say whether the increased flow to the skin of the head when the birds warms up is the result of a simple physiological response, or whether the bird is able to control the radiator.

This line of inquiry might be extended to include other species of bald birds, including the Bald Starling (aka Coleto), the Bornean Bristlehead, the Bald (Noisy) Friarbird, and the Bald Parrot. However, the study would be pointless on Bald Eagles, because…