While in Japan searching for lost moss piglets, Professor Gary Grothman and I took some time off for sightseeing. This is a brief passage taken from The Return of the Ferret Zombies.

Nara is home to a rich cross-section of Japan’s cultural heritage, and is a must-visit destination for all travellers to the country. Like every other community in Japan, Nara claims to have once been the capital of the whole nation, but that ended more than 1200 years ago when Kyoto’s took its turn.

Arriving at the Nara train station after a thirty minute ride from Kyoto, Gary and I set off east toward the temples and shrine complex that have made Nara famous. The moment we found green space, we also found deer. A lot of deer. Small but bossy Sika deer. Each was an oversized Bambie – spotted and vaguely evil. I was carrying the remains of my train-station take-away breakfast, trying to find a garbage receptacle, when I was mugged by a deer. I won the tug-of-war, but just barely. The best alternative to feeding plastic bags to the deer of Nara is to offer them shika senbei. Deer cookies are sold in packets of ten for 150 yen – about a buck-fifty. Cookies made for deer, not cookies made of deer. Gary and I each purchased a pack. 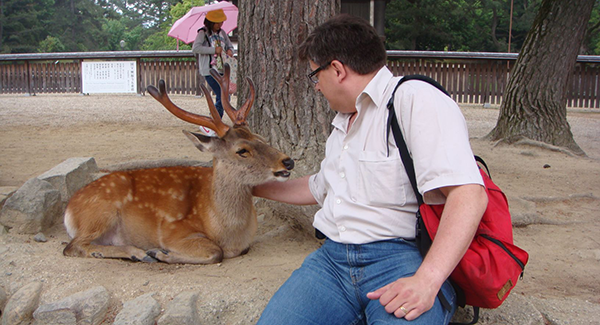 We strolled through a park and then sat contemplatively at the Wakamiya Jinja Shrine. We talked about the search for enlightenment, support for the monastic community, the three marks of existence, and the appalling quality of Japanese television. From there we walked to the district around Todai-ji Temple complex. We first spotted the Great Buddha Hall when we were about 400 metres from it. Even at that distance, it appeared enormous. Gary described it as a “honkin’ huge temple.” The building is the largest structure in the world made entirely of wood, and contains the largest seated bronze representation of Buddha Vairocana. It is also, reportedly, the biggest magnet for school children in all of the Far East. The presence of so many young people, all in uniform, did not detract from the experience at all, because each of them was so well-behaved. When I was a youngster, most school outings resulted in a knife-fight. When we passed children being butted by deer, we gave them some of our cookies to hand out.

The Buddha at Nara is really very, very big. Five hundred tonnes in mass and fifteen metres tall with two and a half metre long ears; the original Buddha would, I suspect, be impressed. It is also really old; parts of it were cast more than 1250 years ago. I had to wonder about the mechanics of the whole situation. Was the bronze statue erected, and then the shrine built around it? Did workers put up the shrine, and then bring the statue in bits for assembly? Did college students get course credit? Were helicopters involved? The temple also contained four bronze statues of butterflies, each with eight legs. Real butterflies have six legs. I gather from our experiences with bunraku theatre that each butterfly represented the reincarnation of a young lover that committed suicide, and that each was destined to descend immediately to hell.

Just outside the temple complex, Gary was accosted by a group of eight children. As part of their school trip they had been assigned the task of stopping overseas visitors, asking them questions in English, and writing down the responses. “May we ask you questions?” they began. “Where are you from? What place do you like best in Japan? Thank you.”

Another group of children stopped Gary, and he got asked the same questions, with slight variations. “What type of Japanese food do you like best?” He was shown a list of options. “Where do you come from?” Gary was shown a map of the world.

Gary looks a bit like a sumo wrestler-in-training. Perhaps he was getting all of the attention because the children thought that he might be a celebrity. I was starting to feel a little left out, but then a group of children approached me, and I went through the routine. I was asked about my favourite Japanese food. I must have mispronounced “ビール,” Japanese for “beer,” because a couple of the children backed up. “Where do you come to Japan?” they continued. I interpreted the statement as a query about my country of origin was. I said “Australia.” They looked confused. It then occurred to me that I was wearing a T-shirt with the word CANADA on it.

Gary and I grabbed a bite to eat before our train journey back to Kyoto. I had a bowl of soba noodles and a large piece of deep-fried tofu, drowning in a chicken-and-fish stock. Not a great repast for a vegetarian. Gary, a carnivore, enjoyed a large plate of cookie-fed deer.

Actually, that is a lie. He didn’t enjoy it at all.