Earl Godfrey’s The Birds of Canada, revised edition, was published in 1986. It made me sad. Descriptions of the Yellow-shafted and Red-shafted flickers from the first edition (1966) had been replaced by a single description of the Northern Flicker. Having been shown that the red-shafted and yellow-shafted forms hybridize where the they come into contact, the two species were relegated to a single species with two distinctive colour variants. According to the Biological Species Concept, if two distinctive groups can hybridize to form viable offspring in nature, then they are members of the same species, whether I liked it or not. 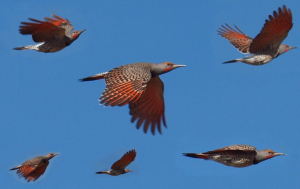 The distinction between the two forms is in the name. The shafts of the flight feathers of Yellow-shafted Flickers are yellow. There are no prizes awarded for knowing that the shafts of the flight feathers of Red-shafted Flickers are red. Males of the former group have black moustaches, and males of the latter have red moustaches. The yellow-shafted form is found over much of eastern and central North America, and the red-shafted form is found in western parts of the continent.

But here comes the twist… A sizeable portion of Northern Flickers residing in eastern North America, hundreds or even thousands of kilometers from the hybrid zone, have some flight feathers with red or orange shafts. Even more curious was the observation that some eastern individuals would have different numbers of red feathers in successive years. For decades, ornithologists tied themselves in knots trying to figure out how this could be. Could some western genes have slipped into eastern populations? Was it possible that a gene responsible for red colouration turned on and off? Surely the red colour wasn’t the result of diet, because flickers eat mainly ants which don’t contain red pigments.

A recent publication by Jocelyn Hudon of the Royal Alberta Museum in Canada and her co-workers provided the solution to the puzzle. Utilizing red feathers taken from museum specimens that had been collected in eastern North America, Hudon and her crew subjected them a bewildering array of extraction and analytical techniques. It looks so impressive when people write things like: “The ether extract was evaporated over a stream of N2 gas and the pigments redissolved in a known volume of hexanes… using anhydrous sodium sulfate powder.”

What did Hudon et al. discover about flicker feathers? The unusual red colouration of feather shafts of eastern flickers was the result of the chemical rhodoxanthin, and not the 4-keto-carotenoids found in western populations. It is unlikely that the flickers synthesized this compound themselves, but rather acquired it in their diet. Hudon and her colleagues felt that the most likely source was the berries of Tatarian, Morrow’s and Bell’s honeysuckles. These plants are native to Asia, but were introduced to North America in the 18th century, and are now widespread.

On occasion, some Northern Flickers in eastern North America must add a few honeysuckle berries to their ant-based diet. Pigments in the berries are deposited in feathers, turning them red. Although it took some clever sleuthing to figure it out, the mystery of red feathers in yellow -feather populations wasn’t so mysterious after all.