In response to a question from reader Ellen Gasser, last week’s entry considered declining populations of the American Kestrel, Falco sparverius. Another reader of A Traveller’s Guide to Feathers, John Cunningham, wrote to me this week, asking if I could write another piece about recent advances in our understanding of American Kestrels. John is a recent convert to the world of birds, and that little bird of prey was one of the first new birds he learned. I discovered a 2017 publication by Megan Shave and Catherine Lindell of Michigan State University that seemed particularly relevant. 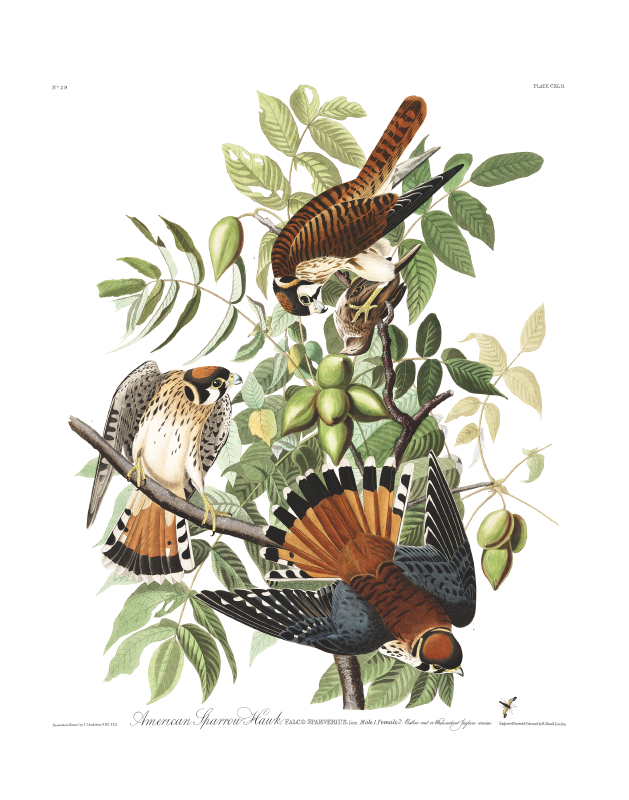 In our attempts to keep the ever-increasing human population well fed, more and more original intact operating ecosystems are being turned over to agricultural land. This sort of conversion generally results in a landscape that is less complex than the habitat it replaced. For birds, one the greatest difficulties is the destruction of nesting opportunities, such as nesting cavities in old trees.

And this is where American Kestrels comes in. The diet of these birds consists mainly of insects and small birds and mammals, many of which are pests in orchards. These kestrels nest in cavities in trees. If insufficient natural opportunities exist, perhaps they would be willing to utilize artificial nest boxes. However, it would be unreasonable to expect the owners of orchards to erect nest boxes without providing evidence that kestrels will use them.

Researchers Shave and Lindell surveyed American Kestrels in a fruit-growing region of northwest Michigan which lacks suitable natural nesting cavities. The researchers hypothesized that sites with nest boxes would be more likely to have the beneficial kestrel in residence. Were they correct?

In the study area, American Kestrels took up residence in 93% of newly-erected nest boxes, and these nests were successful in 91% of cases, producing an average of four fledglings per nest. Nest boxes that were not used were probably too close to other nesting pairs. Of the food provided to the chicks, 81% were arthropods, and 13% were small mammals. Good news!

The publication of Shave and Lindell had a great number of other details, including methodology, the specific results of surveys, and mathematical modelling of data, but all of that distills to a simple message. American Kestrels, at least in this fruit-producing region of Michigan were more likely to colonize and persist at sites to which nest boxes had been added. The authors went on to say that: “Increasing kestrel presence in and around orchards could enhance ecosystem services provided by kestrels.” Most earlier studies of birds of prey in agricultural landscape have focused on Barn Owls, and a broader understanding is bound to be valuable.

With luck, John, many orchard owners will respond to this study by providing nesting opportunities to American Kestrels.

Shave, M. E., and C. A. Lindell. 2017. Occupancy modeling reveals territory-level effects of nest boxes on the presence, colonization, and persistence of a declining raptor in a fruit-growing region. PLoS One 12 (10): e0185701.