When it comes to wildlife, ignorance is never bliss. Decisions about conservation issues are only likely to be effective if they are based on a thorough understanding of the natural history of threatened species, and of the reasons for declines in their numbers.

Indonesia has more threatened species of birds than any country other than Brazil. As in many other parts of the world, Indonesian birds are being lost as a consequence of deforestation resulting from increasing demand for land for agriculture. There is, however, an additional threat to the birds of Indonesia. The nation has a long history of keeping birds as pets, and this causes a very high demand for birds taken from the wild. Although laws exist to protect species like the Sumatran Laughingthrush from exploitation for the pet trade, enforcement of those laws is sporadic in Indonesia, and birds are sold openly in markets by vendors who are unlikely to be prosecuted.

It is against this bleak backdrop that Tomáš Bušina and Marek Kouba added their observations of the behaviour of the Sumatran Laughingthrush. An endemic to the island of Sumatra, this laughingthrush is considered by the International Union for the Conservation of Nature to be endangered and with a declining population. Formerly widespread, the bird can now only be found in remote mountain refuges. The inaccessibility of these spots has hampered study of the Sumatran Laughingthrush, and fundamental aspects of the bird’s natural history remain unknown.

The study site of Bušina and Kouba was in the Karo regency of North Sumatra, at an elevation of 1600 metres. The authors withheld the precise coordinates of the site for obvious reasons. They described the locale as a “rugged montane landscape shaped by valleys with small rivulets… densely covered by trees, with a closed canopy height up to 35 m.” Ideally Bušina and Kouba would have captured laughingthrushes in mistnets, and marked them for individual identification before fitting them with small transmitters for tracking. Unfortunately, the birds could not be caught in nets, and so the researchers devised a different study protocol.

Three observation hides were constructed, and birds were then spotted for twelve hours on each of 21 days between late 2014 and early 2015. Amoung the observations recorded were number of individuals, their behaviour and their group structure.

Groups of Sumatran Laughingthrushes were recorded seventy times. These groups never exceeded five individuals as they moved through the shrubbery, maintaining contact with each other using quiet vocalizations. Individuals were never spotted on the ground. At times, these threatened birds were spied in mixed-species feeding flocks along with Black and Chestnut-capped laughingthrushes, as well as Sumatran Drongos and Sumatran Trogons. These sorts of mixed-species gatherings are not uncommon among birds in the tropics. Although the researchers could not be certain, it seemed that all observations of Sumatran Laughingthrushes were of a single group.

I wrote to Bušina to ask how he came to study the Sumatran Laughingthrush in Indonesia, so far from his home in Europe. He said: “Everything started in 2012 when I completed my Master’s degree program and came to Indonesia as a volunteer. After one year of cooperation with a local NGO I became a project manager of its Sumatran Laughingthrush conservation program. At the same time I started my PhD focused on its restoration and black market monitoring.”

There are both joys and challenges to studying birds in remote spots. Bušina told me that the feeling of being swallowed up by the Sumatran montane rainforest is almost indescribable. “This deep dense jungle can cause a claustrophobic feeling, how silent and lifeless it can look, and then someone could be surprised by a huge number of foraging birds flying over the basecamp. Simply flabbergasting and overwhelming.” Despite the ferocious beauty, in the rainy season Bušina would have to remove as many as 100 leeches from his body each day.

When I asked him what he most wanted to know about the Sumatran Laughingthrush, Bušina indicated that it was hard to know where to begin a response. Although we can venture some guesses, most of the biology of this bird is completely unknown. “The most important thing to know is the current size of remaining population and its real distribution, because this species is under heavy trapping pressure resulting in considerable population decline. The Sumatran Laughingthrush is likely reaching the brink of extinction.”

Although the conclusions that can be drawn from this study of Sumatran Laughingthrushes are modest, the systematic observations of the elusive and endangered bird are the only ones available. Let’s hope that the work of Bušina and Kouba will inspire further study. 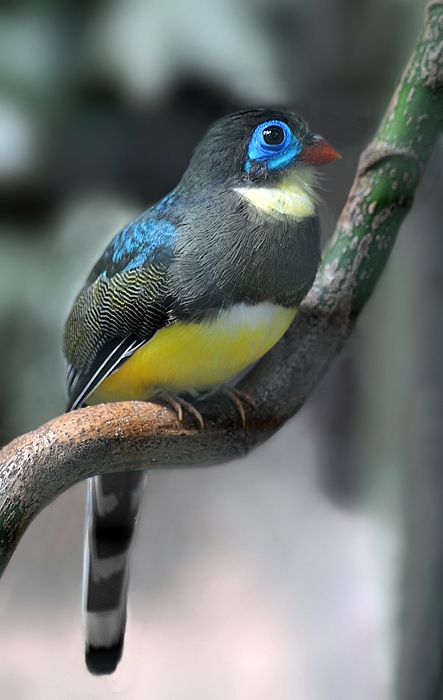