Dar es Salaam may be the most interesting city in the world that I knew absolutely nothing about. A bit of reading quickly alleviated my ignorance. With about 4 million residents, Dar es Salaam is the largest city in Tanzania. It also has one of the fastest rates of growth in the world, and is likely to reach 5 million by the end of the decade. By the end of the century, it may be home to as many as 76 million people, making it one of the largest cities on Earth.

And then there are the House Crows. 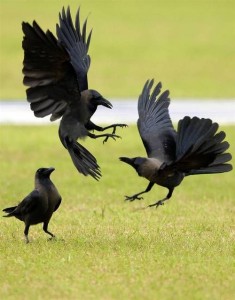 In order to highlight the significance of introduced species, the IUCN Invasive Species Specialist Group constructed a list of 100 of the world’s worst invasive alien species. These are species that have taken up residence far from their native range because of the actions of humans. The list includes such obvious invaders as crazy ants, goats, brown tree snakes, African tulip trees and Dutch elm disease. Included on the list are three birds; the European Starling, Red-vented Bulbul, and Common Myna. After what I read recently, I can hardly believe that House Crows didn’t make the list.

House Crows are native to thirteen countries, including China, Myanmar, Nepal and Sri Lanka. Curiously, the species has also been introduced to twenty-six countries, including Bahrain, Israel, Malaysia, Barbados, and Kuwait. The Australian Department of Agriculture and Food considers the House Crow to be an “extreme threat.” It seems that these birds often arrive in foreign lands on boats.

In the Tanzanian city of Dar es Salaam alone, there are about 800,000 House Crows, descendants of individuals that were introduced to Zanzibar 125 years ago in the hopes that they would eat garbage. If they had stayed on Zanzibar garbage dumps, there wouldn’t have been a problem.

An introduced species isn’t necessarily an invasive species. In order to be considered invasive, a species must have a negative impact on native wildlife or on humans or the economy. According to a recent publication by Moses Shimba of the University of Dodoma and Frederick Jonah of the University of Cape Coast, House Crows in Dar es Salaam certainly meet the criteria of “invasive.” Shimba and Jonah pointed out that these crows have a devastating impact on native wildlife, eating native birds, fish, frogs, lizards and mammals. They strip orchards of their fruit, and eat young domestic poultry. The birds unashamedly enter homes and restaurants to steal food, and are known to spread disease bacteria such as Salmonella and E. coli.

Knowledge is power, and so Shimba and Jonah studied the nesting ecology of House Crows in Dar es Salaam. Which types of trees were selected as nesting sites? Where trees of particular heights and shapes preferred over others? The results might have implications for the control of invasive crow populations.

Ninety-three trees of six species that were measured in neighbourhoods that were recognized as having particularly dense House Crow populations. Of those trees, 47 housed 55 nests, which tended to be located in trees taller than ten metres. This may be a result of efforts to eradicate the crows; the birds may have learned that nesting higher meant greater protection from persecution. Trees with larger crowns were preferred for nesting, but did not always resulting in the greatest nesting success. Crows were most successful when nesting in mango, madras thorn and a type of flame tree, all introduced tree species.

Regrettably, there was no single factor that made for good House Crow nesting habitat. Shimba and Jonah recommended further study in the hopes that it “will help to reveal the still unknown causes of variation in nest success and help to provide useful information for the on-going population control and eradication programs of the crow.”

Remember not to park your car under a House Crow roosting tree when you next visit Tanzania.

Photo Credits: both images were obtained from www.pinterist.com 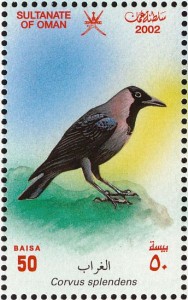