It seems an appropriate time of year to spare a thought for William Mynors. An English seaman, it isn’t certain quite where or when he was born, nor where or when he died. Among the few things we do know about Mynors is that he captained the ship Royal Mary, and that on Christmas Day, 1643, he and his crew sailed past an island in the Indian Ocean without stopping. He named the feature Christmas Island, and more than three hundred and seventy years later, that is the name that we still use.

With a human population of about 2,000, Christmas Island is governed by Australia, although it is much closer to parts of Indonesia. The island has an area of about 130 square kilometres, much of which is designated as a protected area. And what of the birdlife on Christmas Island?

Avibase is a marvelous website, maintained by Dr. Denis Lepage of Bird Studies Canada. Whether I need to check the current thinking about the taxonomic status of a particular bird, or the number of bird species in a region, Avibase is generally my first stop. Avibase’s checklist of birds of Christmas Island provides some interesting statistics. For instance, 164 birds species are known from the island, but at least 115 of those are considered to be rare or accidental. That leaves just forty-nine species that you might  feel confident about seeing on Christmas Island. Four of those have been introduced to the island. The Java Sparrow, House Sparrow, Eurasian Tree Sparrow and Red Junglefowl all have a comparatively large global distribution because of introduction efforts in generations past. Of the remaining forty-five species, six strike me as being particularly interesting. If your life’s ambition is to see every type of bird in the world, it is these six which will require you to visit Christmas Island.

The island is home to two breeding endemics. These are seabirds that breed only on Christmas Island, although their wanderings in the non-breeding season take them elsewhere. The first is Abbott’s Booby which is considered endangered. The second is the Christmas Island Frigatebird, a critically-endangered species. The list of factors working against the frigatebird is a long one. On Christmas Island, their colonial nesting sites are damaged by dust from phosphate mining, and are vulnerable to cyclones. Introduced yellow crazy ants may become a problem for nesting birds in the future. In the non-breeding season, Christmas Island Frigatebirds are harmed by oceanic pollution and garbage, and they are hunted in Indonesia and Malaysia.

The Christmas Island Imperial-pigeon and the Christmas Island White-eye are both found on this particular island and nowhere else. Both species are considered to be near-threatened; even though the range of both are limited, they are comparatively abundant on the island. The Christmas Island Boobook, a lovely large owl, also an endemic, has a global population of between 500 and 1,000 mature individuals, and is considered vulnerable. The taxonomy of the Christmas Island Swiftlet is not certain. Whether a full species, found only on Christmas Island, or merely a subspecies of the Glossy Swiftlet with a much wider distribution, this birds seems to be performing reasonably well.

Wherever you are in the world, Lisa and I wish you a very Happy Christmas. We hope that your life is full of birds. 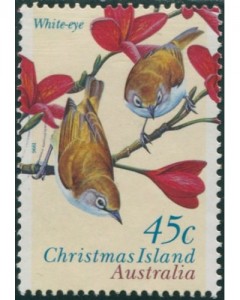