Male mammals make two kinds of sperm. Fertilization of an egg by one type of sperm, one that contains an X chromosome, result in daughters, while the other, with a Y chromosome, results in sons. Although the two types of sperm are made in exactly the same quantity, they are slightly different in their behaviour and longevity, and so mammals can influence the probability of bearing sons or daughters.

It isn’t quite so easy for birds. Male birds make only one type of sperm, and it is hen’s genetic contribution, Z or W, that determines whether an egg hatches into a male chick or a female chick. There is some evidence from a few species that birds may be able to influence the odds of having sons or daughters, but we don’t yet understand how that might happen. In most cases involving birds, the sex ratio at hatching is almost always 50:50.

That doesn’t mean that the sex ratio is necessarily 50:50 in the breeding population. In many types of birds, there is a male-bias, and that bias probably results from the additional predation pressures faced by females of some species as they incubate their eggs or brood their young. 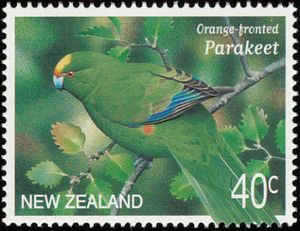 A male-biased sex ratio in a population of birds takes on far greater significance if it occurs in an endangered species. Jonathan Kearvell and Megan Farley of New Zealand’s Department of Conservation studied the adult sex ratio in the Orange-fronted Parakeet, also known as Malherbe’s Parakeet. This critically-endangered parakeet is found in only three valleys on the mainland of New Zealand. In an effort to help ensure their long-term survival, individuals have been introduced to four small, predator-free islands. Although they are challenging to survey, a recent estimate put the mature parakeet population at between 150 and 200 birds.

Kearvell and Farley wanted to know if the adult sex ratio of Orange-fronted Parakeets was male-biased, whether this is a typical or abnormal situation for this species. They also sought to understand possible causes of a bias, and determine the influence of a bias on conservation programs. Although the observable differences between sexes are few, males can be distinguished from females on the basis of their slightly larger body size, their brighter colouration, and their longer bills. Between 2007 and 2012, observers tramped through forested valleys, identifying all parakeets to sex wherever possible.

In the breeding season, males constituted between 68% and 74% of Orange-fronted Parakeets observed. This bias isn’t too surprising, given that females remain inside the breeding cavity for prolonged periods. There was, however, a consistent bias in observations in the non-breeding season toward males, when they constituted approximately 58% of all parakeets seen. Kearvell and Farley attributed this inequity to predation of nesting females by introduced mammals. Plagues of introduced rats are particularly devastating for birds in New Zealand.

“The reduction in the number of females has an obvious conservation issue,” wrote Kearvell and Farley. “There are simply fewer mature females to produce the next generation.” Beyond the problem of numbers, an excess of unmated males can bring additional problems. These extra males can disrupt breeding by mated pairs, although the full effects of this interaction are currently poorly known.

Identifying a problem doesn’t necessarily provide an easy solution. In the case of critically-endangered Orange-fronted Parrots, programs to control non-native predators will certainly be an important step. 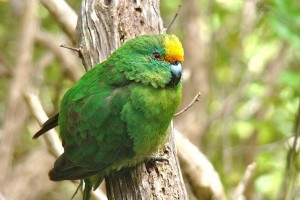