First, Last, or Somewhere in the Middle

Last week I described why it is to the advantage of parent birds to have all of their eggs hatch on the same day, even though their eggs are laid on different days. By waiting until the last egg is laid to begin incubation, all chicks in the nest will hatch synchronously, and will be at roughly the same stage of development. This is the most common situation among birds. But there are exceptions, and exceptions demand explanations.

Zebra Finches have a vast distribution in Australia, and are also found on the islands of Lombok, Timor and Sumba. As seedeaters they are fond of open habitat, and can breed at anytime of the year if water is available. They breed readily in captivity, and are a favourite of novice cage-bird fanciers. Curiously, Zebra Finches do not wait to begin incubation until after the last egg is laid, and so chicks in the nest are different ages. This is true of birds both in the wild and in captivity. Maki Ikebuchi and colleagues at the University of Tokyo in Japan and Universität Bielefeld in Germany studied the phenomenon of asynchronous hatching of Zebra Finch chicks, searching for an interpretation of this peculiar behaviour. They utilized captive subjects, providing them with unlimited access to food and water, and appropriate materials for the construction of nests. In most cases, birds began breeding almost immediately.

Eggs hatched after 12 days of incubation, and Ikebuchi’s team documented the development and masses of each chick each day. Eighteen clutches of eggs resulted in sixty-three chicks. The average period over which all eggs in the clutch hatched was 3.1 days. Compared to some songbirds, development of the chicks required an extended residency in the nest. Their eyes did not begin to open until eight days after hatching, and the first proper feathers did not appear until day ten. Young birds began leaving the nest after eighteen days, and the oldest chicks returned to the nest over a period of days until their younger siblings were also ready to fledge.

In these captive Zebra Finces, asynchronous hatching resulted in an unlevel playing field, with the first-hatched chicks gaining weight faster, and ultimately weighing more than chicks that hatched later. The difference was, curiously not very large. Furthermore, the researchers found that the probability of survival of chicks was not influenced by their place in the hatching order. The researchers considered the possibility that, through differential provisioning, parents might actively seek to maintain the differences in weight among their chicks. If so, the parents seem to have been defeated in their goal. Given that the ultimate differences in weight were quite small, Ikebuchi et al. speculated that the parents may be unable to discriminate between older and younger chicks at feeding time, perhaps because the interior of the nests is quite dim.

In birds such as eagles and pelicans, eggs do not hatch synchronously, and chicks from the first-laid eggs are more likely to thrive than chicks from the last-laid eggs. Even though Zebra Finches also show asynchronous hatching, not commonly seen among songbirds, there appears to be no particular advantage to hatching first, at least in captivity. It will be interesting to see if future research on wild populations of Zebra Finches has the same result.

Photo credits: ‘wild-type’ captive Zebra Finches on a nest – www.singing-wings-aviary.com/zebrafinches.htm; one of the many forms of exotic colouration in Zebra Finches in captivity -  https://www.youtube.com/watch?v=SUaeeyNMCUI . 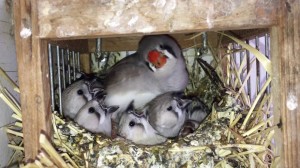