Consider the mighty Yukon River in north-western North America. It begins its journey in British Columbia, proceeds north through the Yukon Territories, and then flows through Alaska before emptying into the Bering Sea. The Yukon River is 3,200 kilometres in length, and has a catchment area of 832,000 square kilometres. It is longer than the Indus, the Rio Grande, and the Saint Lawrence, and discharges more water than the Nile, the Zambezi, and the Paraguay.

By way of contrast, the River Thames is a tiddler. It is 346 kilometres long, and gathers water from an area fifty-two times smaller than that of the Yukon River. On the whole, I am pleased that Krista and I are planning on paddling the River Thames in April and May of 2015, and not the Yukon. We have other things to do with our lives.

And surely length isn’t the only measure of greatness. For instance, there are only four road bridges over the Yukon River, and just two footbridges.

The River Thames is crossed by so many bridges that, despite my best efforts over the past week, I have not been able to tally them with certainty. I can say, without fear of contradiction, that Krista and I will be paddling under a lot of bridges. Using government documents, Ordnance Survey maps and aerial photographs, here is what I have found so far… 1) The uppermost reaches of the River Thames are considered to be non-navigable by powerboats. But even if we have to drag our canoe the whole way, Krista and I will be traversing every bit of the seventeen kilometres between Kemble and Cricklade. In doing so we will pass under at least seventeen road bridges and two footbridges.

2) The remainder of the Thames can be used by powerboat enthusiasts and paddlers alike. Krista and I will guide our canoe along the 217 kilometres stretch whose flow is regulated by locks. This will involve us gliding under 81 road, rail and footbridges. They include structures with such whimsical names as Ha’penny Bridge, Bloomer’s Footbridge, and Tadpole Bridge. 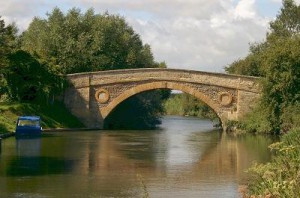 3) When we reach the lock at Teddington, the Thames becomes tidal, and Krista and I will need to swap our canoe for a kayak. After doing so we will paddle through the great city of London, and under an additional 30 bridges that span just 36 kilometres of river. These include such iconic monuments as Westminster Bridge, Tower Bridge, and London Bridge.

Of bridges, Russian Premier Nikita Khrushchev is reported to have said that: “Politicians are the same all over. They promise to build bridges even when there are no rivers.” I am not certain what that means, but Khrushchev apparently also said: “If you cannot catch a bird-of-paradise, better catch a wet hen.”

Next week I will write about the very first Thames bridge under which Krista and I will pass, and the very last.