There are many urban myths associated with birds. One of my favourites is that, when given the opportunity, birds will gorge upon Yorkshire puddings to the point where they become too heavy to fly.

Stories about fruit-eating birds and mammals becoming drunk on the alcohol in decomposing fruit are not so much mythical as poorly-investigated. It seems that reports of the intoxication of elephants that have ingested overly-ripe fruit may have been a misinterpretation of the situation, related more to the ingestion of other compounds including nicotinic acid.

The potential for alcohol ingestion by birds certainly exists. After all, the whole point of a plant producing fruit is to have it consumed by an animal who will then disperse its seeds. The reward for the animal is the fruit’s energy-rich pulp. In order to attract a fruit-eating bird or mammal, fruits are generally brightly-coloured, and their smell is likely to be pleasant.

Could it be that fermenting fruit is even more attractive to frugivores that less-ripe fruit? Birds might discover fermented fruit after being attracted by the scent of alcohol. Furthermore, the caloric content of ethanol is particularly high. Frugivorous birds are bound to consume some alcohol, but is the alcohol particularly attractive? 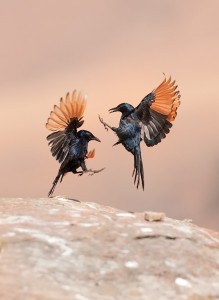 Mannqoba Zungu and Colleen Downs of the University of KwaZulu-Natal in South Africa sought to determine whether birds consumed more food when it contained ethanol. Their study involved ten Cape White-eyes, ten Red-winged Starlings and six Speckled Mousebirds, all captives. Subjects were fed on an artificial diet suitable for fruit-eating birds. Red food colouring was added to the food to make it more appealing. Half of the food offered to the birds contained one percent ethanol, and the other half did not.

For members of all three species, there was no statistical difference in consumption of the experimental and control food, although there was a tendency toward consumption of food lacking ethanol. It seems that alcohol does not act as a positive foraging cue, at least in these species.

Zungu and Downs pointed out that the results of their study should be considered preliminary, and that inferences based on their data are modest. Despite the appeal of studying alcoholic fermentation, we know very little about the alcohol content of over-ripe fruit of most plant species under natural circumstances, particularly in the tropics. The study of Zungu and Downs exposed bird to food with only one concentration of alcohol. More alcohol or less might prove more appealing. Furthermore, it seems likely that birds of different species metabolize ethanol at different rates, based on whether they might experience alcohol frequently, as frugivores would, or rarely as granivores would. Further study is needed.

In the meantime, there is a bottle of pinot grigio chilling in the refrigerator. 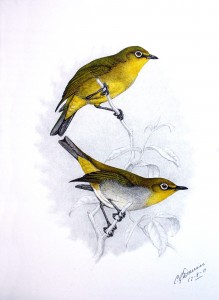