The Tenacity of Pied Bush Chats

In birds, parentage represents a huge commitment. There are a few hyper-precocial species in which chicks are fully able to care for themselves soon after hatching, but even in those species the effort required to get to that stage is enormous. As in humans, altricial birds are born nearly helpless, and rely on their parents for an extended period for food, warmth and protection. In balancing the demands of the chicks against the energy of the attending parents, is there a single best solution? Should parents always invest maximally in the welfare of their chicks, or might their efforts vary over time?

Navjeevan Dadwal and Dinesh Bhatt of Gurukula Kangrii University in India investigated changes in parental investment in the Pied Bush Chat. These small, altricial songbirds breed in southeast and central Asia and on the Indian subcontinent. As the name implies, males of this species are black and white, and fifteen subspecies are recognized across its vast range. The IUCN considers the Pied Bush Chat to be of least concern and with a stable population.

Dadwal and Bhatt examined the breeding biology of a population of Pied Bush Chats in the foothills of the Himalayas in northern India. Males were colour-banded for individual identification, and behaviours such as courtship, nest-building, incubating and provisioning were documented. The researchers asked whether males or females contributed more to nest defense, and whether the intensity of those defensive efforts changed as the breeding season progressed.

When a model of a predator, a stuffed Tawny Eagle, was placed near the nest, parent chats responded by giving alarm and threat calls, with males vocalizing significantly more. The authors speculated that females may have been in a weakened state after building the nests and laying the eggs. Alternatively, males may have been more willing to display as a way of advertising their quality.

As the incubation of eggs and the brooding of young progressed, chat parents increased their aggressive responses to the model predator, showing nearly four times as much response while caring for older chicks than for young eggs. As exposure to the model never resulted in a loss of chicks or eggs, perhaps repeated exposure caused positive reinforcement, such that the parents considered their defense efforts to be successful, and so responded more vigorously in successive tests. Given that Pied Bush Chats breed seasonally, parents may have been more inclined to defend more vigorously later in the sequence because less opportunity remained for a second attempt if the first attempt was defeated by a predator.

As an alternative explanation for the seasonal increase in defense behaviour, it could be that older chicks are more valuable to the parents than younger chicks, and that both are more valuable than eggs. Future costs to the parents of raising older chicks to independence are smaller than the same costs for young chicks or eggs, making them more valuable in the struggle by parents to pass along their genes to future generations. In any case it is nice to know that young Pied Bush Chats receive such good care.

When I wrote to Dadwall, he told me about some of the rewards involved with working with birds in his part of the world. “Studies of breeding ecology of Himalayan avifauna offer enormous possibilities for researchers, and certainly provide an excellent opportunity for insights into processes of diversification.” For instance, playback of warbler songs has illuminated the way that reproductive isolation can cause one species to diverge into two. “Such studies lead us to believe that the knowledge about bioacoustics and distribution patterns of particular taxa can significantly contribute to our understanding of the process of diversification.”

Once again, birds lead the way in providing answers to the great questions about nature. 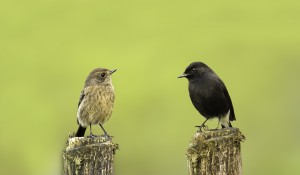