I recently asked readers of A Traveller’s Guide to Feathers to write to me, suggesting topics or species about they would like to know a little more. Ellen Gasser wrote to ask about populations of American Kestrels, saying: “My feeling from personal observation is that they are far less abundant in farm/ranch areas of Alberta than 30 years ago.” Here is what I found, Ellen.

My first port of call was the website of the International Union for the Conservation of Nature, and their Red List of Threatened Species. According to the IUCN, the American Kestrel is of “least concern” with a population that is apparently stable across its very wide distribution. These birds have a vast range across North, Central and South America. That doesn’t sound too bad at all.

Digging deeper, I found that things are not quite so rosy for the American Kestrel as the IUCN seems to feel. In a commentary piece in the latest issue of the Journal of Raptor Research, Christopher McClure of the Peregrine Fund and his colleagues pointed out that this bird appears to have been in decline for decades. The word “appears” is an important one in this case, because different sources of information provide different answers to questions about kestrel abundance. Christmas Birds Counts (CBC) do not always agree with the North American Breeding Bird Survey (BBS), which sometimes contradicts the results of counts of birds during migration. McClure et al. pointed out that conservation practices are only likely to be effective when we know the causes of decline, if such declines actually exist. What we need is evidence.

Different methods of assessment of population abundance are almost certain to provide different answers. For instance, changes in numbers seen on CBCs may reflect changes in migration distance, rather than a change in the absolute number of birds. If surveys are conducted at the same time each year, changes in the seasonality of activity of birds brought about by climate change may be misinterpreted as a change in abundance.

If populations of American Kestrel are, in fact, falling, what is the most likely cause of the decline? Cooper’s Hawks, which prey upon the smaller American Kestrel, are increasing in numbers in some places. However, the researchers concluded that the timing of increases in the predators did not coincide well with declines in the prey. Could pesticides be causing kestrel declines? It seems that the use of the most-likely pesticides happened after kestrels began to decline in number. Might the alteration of kestrel breeding habitat be to blame, with fewer nesting cavities available to the birds? This seems unlikely because the numbers of American Kestrels have fallen even in spots where the occupation of artificial nest boxes, suitable for kestrels, has declined.

McClure and his colleagues suggested that several threats may be working together, interacting in some subtle way to produce the apparent decline in numbers of American Kestrels across North America. In trying to come to a concise statement about the state of our understanding, they wrote: “consistently too many kestrels seem to be dying relative to the number fledged each year.”

Rather than leaving their assessment at that rather unsatisfactory point, McClure et al. suggested a path forward. That path will not be an easy one, and results will not come quickly. It was suggested that the findings of count data, such as those of CBCs and the BBS should be supplemented by specific research on the abundance of American Kestrel’s across their range. Further investigation of the best ways to interpret nest-box studies are needed to avoid misinterpretation of results. Beyond simple counts, the future of American Kestrels will rely on a better understanding of reproductive rates, dispersal of young individuals, adult survival, and specific causes of mortality. Information about the lives of these birds in the breeding season is a good start, but conservation efforts are most likely to be effective when we have also documented opportunities and threats across the kestrel’s range in the non-breeding season.

Thank you for the question, Ellen. American Kestrels do appear to be in decline, but researchers are working diligently to ensure their long-term survival. 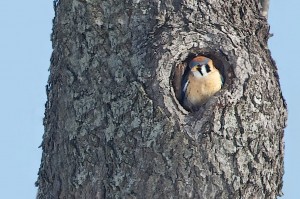