The Flexibility of Bird Behaviour

Birds are models of marital bliss. Given that there are something like 10,000 species of birds, it is not surprising that there are plenty of exceptions, but the most common avian breeding system, by far, is monogamy. The specific roles of mother and father offer differ, but in most cases both parents contribute to raising the young. One Mommy, one Daddy, and lots of happy chicks.

If that were the end of the story, it would be a rather boring one, and birds are never boring. The subtle variations on the theme of social monogamy in birds are myriad. One of these variations is interspecific brood parasitism in which females of one species lay their eggs in the nests of birds of another species, leaving the cost of raising their offspring to others. Most bird enthusiasts will be familiar with interspecific brood parasites including Brown-headed Cowbirds in North America, Common Cuckoos in Europe, and Pacific Koel in Australia. Each takes advantage of a wide range of hosts.

Less well known is the phenomenon of conspecific brood parasitism (CBP). In this situation, females lay eggs in the nest of other members of the same species. Birds can be sneaky, and simply detecting CBP is a challenge, so that researchers often rely on genetic mismatches between chicks and their mothers to show that it has happened.

The benefit to the parasite is easy to imagine. A lot of eggs means a lot of hungry chicks. By leaving the eggs with someone else, a female might greatly increase her lifetime reproductive output. In most cases of CBP studied to date, the costs of parasitism to the host have been reasonably small. Ducks and geese provide comparatively little direct care to their young, and a one more chick is unlikely to be costly. 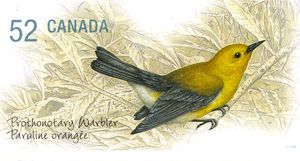 The situation is very different in birds like the Prothonotary Warbler. Breeding in woodlands in the southeastern United States, this warbler nests in natural cavities and nest boxes. As with other songbirds, the young are completely dependent on their parents for care.

Anna Tucker and her colleagues at Virginia Commonwealth University and the College of William and Mary studied conspecific brood parasitism in a population of Prothonotary Warblers near Richmond, Virginia. Many of these birds utilized nest boxes provided by the researchers. Anticipating that CBP would be costly to the individuals whose nests received eggs from other individuals, they compared the reproductive success of hosts to those birds that were not parasitized. Study animals received leg bands for future identification, and had blood samples taken for genetic analysis.

Of 233 broods studied, sixty had one or more chicks that were not the offspring of their social mother. Overall, more than twelve percent of nestlings were parasitic. Not surprisingly, females that had been parasitized by another warbler had more chicks leave the nest, but fledged fewer of their own young than did females who were not parasitized. Being parasitized was costly. Tucker and her coworkers found evidence that at least some of the parasitic females were “floaters,” individuals that had been unable to secure their own nest sites, and so resorted to dumping eggs in the nests of others.

When I contacted her, Tucker explained that one of the most interesting aspects of the ongoing study of Prothonotary Warblers was the effects that the addition of nest boxes has had on the population. “These boxes were first established about 25 years ago to support a then-declining population.” The population has now grown almost to the point of overcrowding. This has probably created the conditions for females to dump eggs. “This flexibility on the part of the females laying parasitic eggs has also reshaped the way I think about avian breeding behaviors,” she wrote. Breeding systems in birds are much more complex that we have considered them to be in the past. 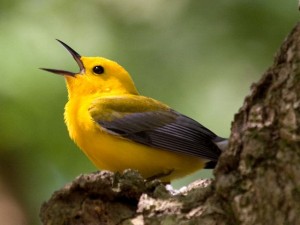