A Tough Time For Dippers

It is now well established that the activities of humans are resulting in significant global climate change. In particular, extreme weather events such as heatwaves, droughts and floods are becoming more severe and more common. How far this change is likely to proceed, and quite how fast, remain to be seen. Wildlife will certainly feel the impact of climate change, but studies of these consequences are needed desperately.

Brown Dippers are almost ideally suited for studies of the impact of extreme flooding. They are found throughout mountainous regions in Japan, Vietnam, Taiwan, China and other parts of central Asia. Pairs establish territories along fast-flowing streams and rivers, and feeds on large, aquatic invertebrate animals that they capture while walking underwater along the streambed. These dippers are comparatively common in places, and are not particularly secretive. They nest on cliff ledges, under bridges, and in cavities. 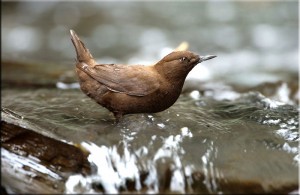 Shiao-Yu Hong of the National Pingtung University of Science and Technology and his colleagues investigated the impact of extreme flooding events on the reproductive performance of Brown Dippers. Their comprehensive study was conducted in streams of the Tachia River system in central Taiwan between 2003 and 2014. This period saw fifteen flooding events, varying in intensity and lasting from one to three days.

In Taiwan, the typhoon season typically runs from June to October. Hong et al. documented temperature and water flow. Brown Dippers were counted, and reproductive attributes such as laying date and nesting success were recorded. Further, the team sampled the identity and abundance of invertebrate animals in the streams in which the dippers foraged.

Floods resulted in a reduced availability of food for the Brown Dipper, and extreme flooding caused a decline in their survival. More insidious was the impact of flooding on reproduction. The breeding season of these dippers in January to April, several months after the end of the typhoon season. Even so, low food availability following severe floods resulted in later breeding, a lesser number of offspring produced, and a smaller dipper population the following year. For the birds, the most important feature was not the severity of each flood, but the length of time that had passed since the flood had ended. More time allowed the invertebrate animal population to recover.

It is not likely that the Brown Dipper will fall to extinction in the coming decades because of global climate change. However, increases in the frequency and severity of flooding that results from typhoons will almost certainly have negative consequences for them. The results of this study are an important indicator of how changes in climate will influence other wildlife species. 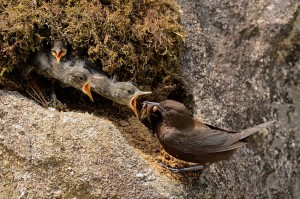