Tits in the Himalayas

A number of my colleagues study bats. Some of those researchers consider a remarkable phenomenon know as elevational species replacement. As one moves uphill from habitat at low elevation to high, a particular bat species will get replaced by a similar but different species of bat, and then by another. Birds, amphibians and reptiles all show this sort replacement of one species with another with changes in altitude.

There are two possible reason for this sort of replacement. It could be that each species is particularly-well adapted for the conditions found within a given altitudinal range, and that individuals remain in their preferred habitat. Alternatively, one species might be a particularly good competitor, forcing members of other species to accept more marginal habitat at a different altitude. There has been considerable study of elevational species replacement in tropical zones, but far less in more temperate regions.

Sahas Barve and André Dhondt of Cornell University in Ithaca New York sought to address that deficiency by studying two tit species in the Himalayas of India. Unlike the situation in the tropics, birds in the Himalayas are likely to face very large seasonal variation in temperature, and considerable differences in the availability of resources in the breeding and nonbreeding seasons. 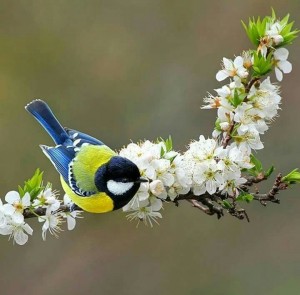 The birds studied by Barve and Dhondt were the Green-backed Tit which breeds at higher altitudes, and the Cinereous Tit breeding at lower altitudes. They overlap at an altitude of between 1300 and 1400 metres. These hearty little birds are both year-round residents throughout the Himalayas, and are very closely related to one another. They occupy a broad range of habitats that include forests and human settlements. In regions in which the habitat has been altered by humans, including settlements and nearby agricultural lands, Cinereous Tits can be found at elevations as high as 1600 metres. What determines these patterns of distribution?

Barve and Dhondt studied the responses of tits to the playback of songs at three altitudes. One region was low enough to be occupied by Cinerous Tits alone, one was high enough to be occupied only by Green-backed Tits, and one was of intermediate altitude and had both species. At all three sites, individuals heard the playback of songs of their own species, and of the other species.

Not surprisingly, at all three sites, individuals of both species responded strongly to playback of songs of their own species by approaching the playback speaker, and responded less aggressively to the playback of songs of the other species. In the region where both species were found, Green-backed Tits were more likely respond aggressively to the playback of Cinereous Tit song than the other way around, and the researchers concluded that Green-backed Tits were the behaviourally-dominant species.

At the altitude at which both tits could be found, Barve and Dhondt provided feeders at which the birds might interact in the non-breeding season. They found that Green-backed Tits were more likely to displace Cinerous Tits from the feeding opportunity than the reverse situation. Again, Green-backed Tits were the behaviourally-dominant species.

Despite this dominance of Green-backed Tits over Cinereous Tits, it doesn’t seem that aggressive behaviour determines the altitudinal distribution of these two species. Given a significant overlap in distribution, it seems more likely that habitat preferences might be more important. Although Cinereous Tits are common in forested habitat at lower altitudes, they seem to be restricted to regions of human habitation in the regions where both species found. When I contacted Barve, he wrote to say: “I personally think cinereous tits live at those (mid) elevations purely because people regularly feed birds there. I also think they can live up there (because) they roost in people’s houses, in slots under the eves so they can keep warm on long cold winter nights.”

I asked Barve whether the residents of the Indian Himalayas are particularly keen on the tits in their communities. He felt that there was no special fondness for tits, and the locals do not have a special term for that sort of bird. Instead the tits get lumped together with other small perching birds under the title of “sparrows.” However, Barve indicated that: “It is considered a good thing in Hinduism to feed animals instead of throwing stale rice or old bread in the garbage,” and so “they just throw it in their backyard and the birds love it.”

Barve explained to me that fieldwork in that region can be challenging, but that when operating in a region surrounded by Himalayan peaks up to 7000 metres, and with 250 bird species to watch, “it is too much fun to hate any part.”